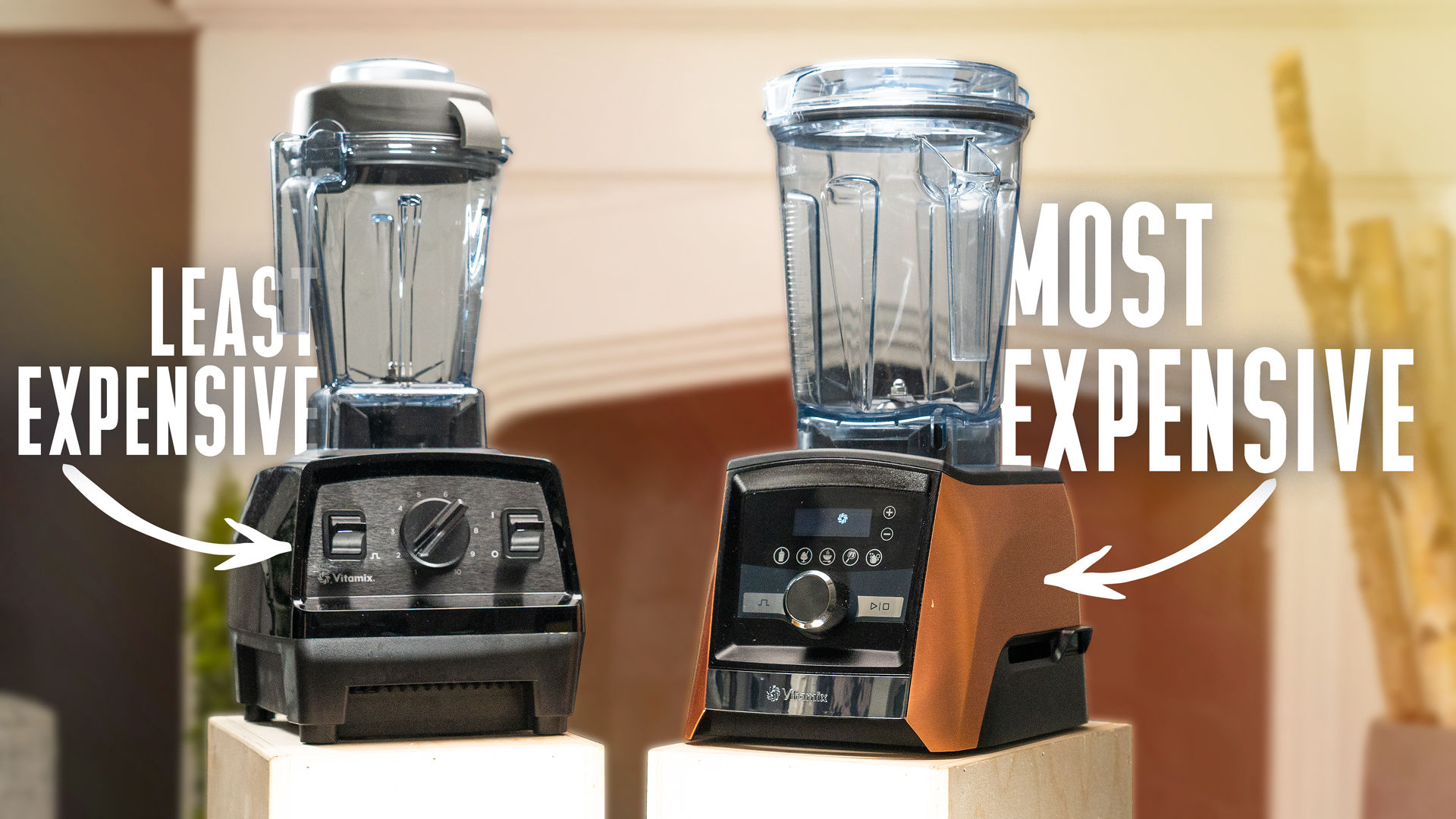 In today's video/article, we're going over the differences between the most expensive and most affordable Vitamix blenders. The most expensive blender was using the $650 Vitamix A3500 in the copper finish. For our least expensive machine, we'll be looking at the $350 Vitamix E310.

We're going to be focusing on brand new models, but at the end of the video/article, I'll tell you how to save some money if you're looking for an even better deal.

Something that many don't know when buying a Vitamix, the full-size machines can all produce the same results, even if they're using slightly different motors. If you made the same recipe in both of these machines, you wouldn't be able to tell the difference if you use the same exact speeds for the same amount of time. The most noticeable differences come down to things like the features, appearance, container compatibility, noise, and warranty.

Let's take a look at these machines, starting with the least expensive option, the E310.

The E310 is the most affordable, brand new, full-size Vitamix and it comes in at $350. It's an older design, but it's still a capable machine, especially if you're on a budget. It's part of the explorian series, has a 2 horsepower motor, is really loud, and has no controls other than the variable speed dial, pulse, and power button. It has a 5-year warranty and is straightforward as you can get when it comes to operating it. Turn it on and turn the dial or pulse until you're are done.

Very simple and straightforward to use. It's loud but priced well when compared to other brand new Vitamix machines. If you don't like a lot of bells and whistles, this one is for you.

For me personally, I like having a timer and preprogrammed modes where I only have to push a button and not sit there manually adjusting the dial, but that being said it's not the most difficult thing to do. All Vitamix's are pretty loud since they are so powerful, but the E310 and the cheaper machines seem to be the loudest. If you're going to make soups for example, that take upwards of 5 minutes to make, it gets pretty loud. Especially since this machine has to be adjusted and turned off manually while machines with presets will automatically run through presets and then turn off automatically.

One of the reasons people confidently invest in a Vitamix is because of their warranty. On an expensive product like this it's nice to know there is a solid warranty against normal wear and tear of a machine with parts, labor, and shipping both ways. The E310 has a 5-year warranty, which is pretty good - but not the longest in terms of Vitamix warranties. More on this later.

The A3500 is the most expensive machine Vitamix made for home use and it has the features, warranty, and finishes to go along with that price tag.

For features, this has 5 programmable settings for Smoothies, Hot Soups, Dips & Spreads, Frozen Desserts, and even a Self-Cleaning option. It also has a physical variable speed knob, touch screen controls, container detection to automatically adjust the timers for different sized containers, and a timer. It can also work with the Vitamix smartphone app to give you access to 17 different types of blends. It even has a screen saver when you're not using it.

For the warranty, this Ascent series has the best warranties Vitamix offers at 10 years. Comparing that to the E310 at 5 years, you're doubling the warranty while also having more features on the machine as well.

The sound level of the Ascent series is less than the others from Vitamix, due to their new container designs. While you wouldn't want to turn any of these machines on at 5 am while the rest of your family is asleep, the reduced noise coming from the ascent series of machines is a nice bonus.

The A3500 is also available in metal finishes to match your kitchen, this is the copper metal version.

If you like the look and extra bells and whistles that come along with the higher-end appliances in your kitchen, the A3500 is currently the best of the best for your home kitchen.

So if the most affordable doesn't have enough features, and the most expensive is too expensive, there are a lot of different models to consider in the mid-range.

If you're looking to really save big on a Vitamix though, check out their certified reconditioned machines. You can save about $60 on the Vitamix E310, and $100 or more on the A2500 or A3500. All of their certified reconditioned machines are inspected and run like new and come with either a 3 or 5 year Vitamix warranty. I'll leave a link below to check out the current inventory.

Those are the differences between the most expensive Vitamix and the least expensive. It can be tough to tell the difference since they can make the same recipes, but it comes down to how you use the machines if you want pre-programmed settings, warranty duration, sound levels, and appearance that change between models.

Be sure to subscribe on YouTube to find your way back in the future, and check out some of my other videos on the channel. I'd love to grow my channel more and would love for you to be along for the ride.

Let me know if you have any questions or comments in the comments!